Looking for a Way to Satisfy that hunger?

drop us a line 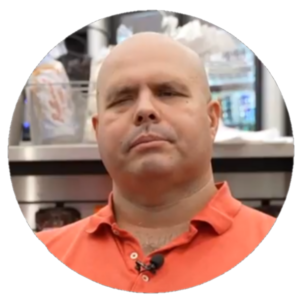 Don’t ever tell Giovanni Francese he can’t do something – he’ll prove you wrong.

As CBS 2’s Audrina Bigos reported Wednesday, he’ll also open your eyes to the potential of people who are blind and visually impaired.

Francese is totally blind and owns his own business. He is no stranger to the service industry.

“My family is in the restaurant business – we’ve got restaurant Mattone in LaGrange Park, Coarse Italian in Glenview, and I worked there for 20 years,” he said.

But then, Francese ventured out on his own and created Super G Vending. He credits training from the business enterprise program for the blind.

“Our mission is about education, employment, independent living,” said Rahnee Patrick of the Illinois Division of Rehabilitative Services.

“The Business Enterprise Program for the Blind provides an entrepreneur opportunity for blind people to own their own businesses – either in vending, cafeteria, or gift shop,” Francese said.

His first business was a hit, and now, his latest business is open. It’s a micro-market at the Lake Point Tower Condominium.

We wondered what his secret is for keeping his inventory in check.

“Organization is a big key, so long as when I put the order away, it’s all put in the same spot, well then I always know that I’m always grabbing the Pepsi as opposed to the Diet Pepsi,” Francese explained.

“I can run a report that’ll tell me what the sales were on a day-to-day basis, through my phone or through a software program called JAWS that helps read my PC at home.” Francese said.

But even with those advancements, the unemployment rate for people who are blind is 70 percent.

“Just because they’re blind doesn’t mean they don’t have the skillset your company is looking for,” Francese said.

Francese lives by example. HE can’t drive, so he hired Chris, who is deaf.

“Like everybody that has a disability, they just want to be able to work and be independent, and provide for their families, and be able to live a normal life just like anybody else,” Francese said.

Giovanni Francese Is Completely Blind And Owns A Successful Vending Business In Lake Point Tower
By Audrina Bigos December 4, 2019 at 6:04 am Filed Under:
Audrina Bigos, Blindness CHICAGO (CBS)
If you want to learn more about the Business Enterprise Program for the Blind, click here for the Illinois Department of Human Services.
Menu